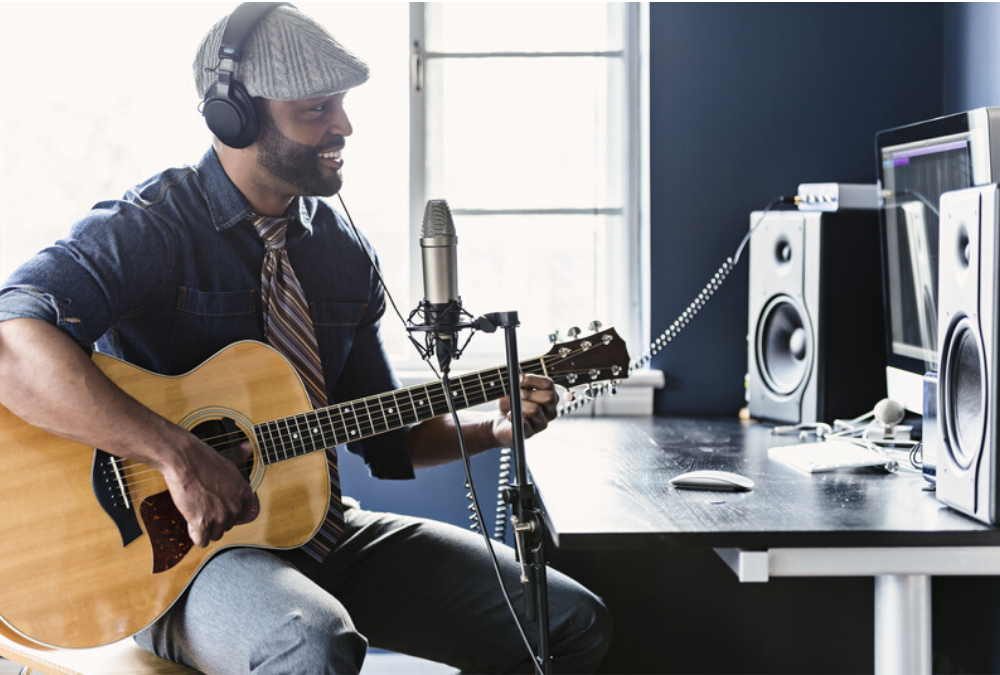 So you’re stuck at home and have undoubtedly lost work due to the current COVID-19 pandemic–we are all in this boat together. However, while in-person gigs may be unavailable for the time being, there is nothing stopping composers and artists from creating music from the sanctuary of their own homes. With this comes the need for musicians to collaborate on any number of projects, and composers and artists alike are looking for musicians of every instrument and voice who have the ability to record remotely to contribute to their projects. This series of articles will walk you through the steps necessary to launch your home recording studio to be able to capitalize on possible remote recording work as well as your own projects.

To begin, let’s look at the equipment needed to get started–this can be summarized in six parts: 1)  computer, 2)  software, 3)  audio interface, 4)  microphone, 5)  microphone stand, and 6)  microphone cable. With these six pieces of gear, you will be able to hit record and start laying down your own parts on any number of projects.

Computer:  First, there is the most obvious component in this chain: a computer. It is generally recommended that musicians own an Apple MacBook or iMac, as these are standard in every major recording studio in Los Angeles and used by the vast majority of music makers. While some audio software is available across Windows and Mac platforms, some are specific to Apple, which we will look at next.

Audio Software:  The second piece of gear in the chain is the audio software, known as a Digital Audio Workstation, or DAW. The industry standard is Avid’s ProTools. This software works across Windows and Apple operating systems and can be obtained on a subscription basis. The normal rate is $39.99/month while those associated with an educational institution can get a significant discount at $9.99/month in a month-to-month contract or $8.25/month if the whole year is paid upfront. However, just because ProTools is industry standard, does not mean it is the most user-friendly, particularly for the beginning home studio entrepreneur. For that reason, my suggestion is to check out Apple’s Logic Pro X. At $200 it is a bit more expensive upfront, but the user interface is significantly more conducive to first-time self-recorders. Additionally, Logic Pro X comes with a massive library of samples and virtual instrument sounds that can be used in your own musical endeavors. MIDI programming, in general, is much cleaner and quicker in Logic when compared to ProTools–so much so that I don’t teach my college students MIDI programming in ProTools at all. I teach them MIDI programming in Logic and audio recording and editing in ProTools.

Audio Interface:  The third piece of gear is the audio interface. This is the brain of the system, as it is used to connect a professional external microphone to your computer which is then recorded into a DAW. In general (and this will be true of microphones as well), the cheaper the interface, the poorer the sound and performance. The good news is, technology has advanced to the point where the sonic difference between a $150 interface and a $3,000 interface is not noticeable to the vast majority of casual music consumers. For the sake of brevity, here are three options, a “good,” “better,” and “best.”

Microphone:  The fourth piece of gear is the microphone. This bit of hardware is, in this engineer’s opinion, the most important part of the chain. The difference between quality and type of microphone is far more perceptible than that of an interface, and all DAWs introduce no sonic coloring. If you want a great sound, start with a great microphone.

There are hundreds of excellent mics to choose from; some work great on a wide variety of instruments while others are tailored to a specific instrument. For the purpose of this article, we will look at three options that work on multiple instruments, again following the “good,” “better,” “best” ranking.

Microphone Stands:  Lastly, let’s look at mic stands and cables. Don’t be cheap. Mic stands serve two purposes: 1)  to position the microphone appropriately relative to the source and, 2)  to support the microphone so it doesn’t fall and get damaged. In general, I recommend buying either K&M (König & Meyer) or DR Pro stands. They are the best quality and will not break over time. A tripod stand with a boom will most likely be the type of stand needed in any startup home studio, and they cost approximately $80 from either brand. I am partial to K&M stands due to the type of t-bar locking screw they employ to tighten the clutch, meaning it won’t droop once set, even with a heavier microphone on the end.

Cables: Finally, you will need an XLR cable to connect the microphone to the audio interface. The best quality cables come from Mogami or Canare and cost between $35-$70 for a twenty-five-foot cable. As with mic stands, cables are not the things to be cheap about. These cables can last a lifetime if properly cared for. It would be better to purchase a less expensive audio interface than to try and save money through cables and mic stands.

In conclusion, assuming you already own a MacBook, if we tally up the cost of Logic Pro X, the Focusrite Scarlett 2i2, the Vanguard V4, a K&M boom stand, and a Mogami Gold Studio 25 foot XLR cable, this brings the total cost of a great start-up home studio to $900. This is a relatively small sum when compared to the earning potential of a home studio, and with the current conditions and stay-at-home orders, this is a great time to invest in this equipment, get familiar with the process, and start making music out of your own home. Even after COVID-19 runs its course and the quarantines are lifted, this gear will continue to serve you and help make you marketable to the remote-recording business.

Recommendation:  Now that you have your home recording studio set up, be sure to let everyone know that you are available for remote recording work!  For starters, register yourself on the Remote Recording Database at https://www.remoterecordingdb.com.

In the next article, we will explore best practices to deliver amazing sound to your clients.